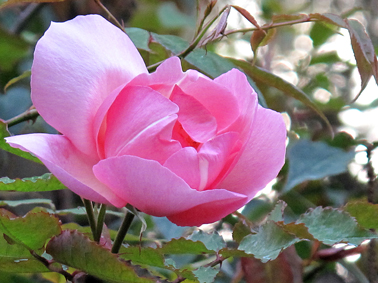 I still can’t believe it!

I’m in the same company as Madonna, Ingrid Bergman and Queen Elisabeth! I have become a rose. One could actually say, I have been reborn in India.

It all began in Kolkata. I was visiting the Botanical Garden early in 2008, searching for the origin of Rose Edouard, when I asked the Director if he knew any rosarian in India that might be of help. It was obvious he didn’t have to think twice; he quickly penned two names and their address on a piece of paper: Girija and Viru Viraraghavan, ’Hillview’, Kodaikanal.

Regretfully, we didn’t meet that time. I looked up Kodaikanal on the map, a very small dot almost in the center of south of India. I sent Girija an e-mail from Kolkata and when I got her reply, I still remember how it triggered my curiosity, and, how I so wished I could have made some changes to my itinerary and added more days to my stay in India:

We live in Kodaikanal, which is a hill station and grow many old roses, as my husband is a rose breeder working with Rosa clinophylla (the only tropical rose species in the world) and R. gigantea, also an Indian species.

Love to hear from you again.

It took me nearly seven years to return to India. At the end of 2014, after the Regional Convention of the WFRS in Hyderabad, I finally found myself in the backseat of a taxi, leaving the hot plains and moving up into the mountains, terrified by the steep slopes, but I closed my eyes and comforted myself by thinking of how close I was to fulfilling my dream, while the car climbed the narrow serpentine road leading to the misty rooftop of the mountains and my final destination, Kodaikanal.

It was already late afternoon when I arrived at the entrance of ‘Hillview’, the old heritage house that has been the home and workplace of Girija and Viru since 1980. They were out to greet me, together with Kim, their lion-coloured dog that follows Viru’s every step, and showed me to an impressive curved flight of stone steps leading up to the more than 100-year-old stone house and its terraced garden.

Many people dream about changing their lives into something more exciting and fulfilling. Viru and Girija made their dream real. In their early forties they decided to dedicate their lives to the queen of flowers, and move from Hyderabad with their collection of rose plants to the better climate at Kodaikanal. Viru’s early retirement from a secure and prestigious government position came as a surprise to his colleagues.

“It was difficult for them to understand that emotional security is much more important than material security. But a good friend, who was a keen rose grower, told me point blank: ‘Viru, you are wasting your time in the civil service.’ ”

After the life-altering move to Kodaikanal Viru was able to fully concentrate on his rose-breeding program; and Girija, who holds a master in history, set out to explore the history of the rose in India from ancient times. But first they had to do something about the garden, which had been neglected for decades.

“It was a real challenge to develop a garden on this rocky and very steep land where most of the soil had been washed away by the monsoon rains. We planted the roses we had brought with us from Hyderabad and made flower beds wherever there was soil, and laid out paths to join the scattered plantings,” says Girija, and summarizes the result after 35 years with a happy laughter: “I think one can say that ‘Hillview’ is a uniquely eccentric garden, matching the personality of the owners!”

As we continued our walk up the old flight of stone steps to the house, surrounded by a mass of greenery growing on the sunny slope, interspersed here and there with dots of color from camellias, hibiscus and roses, I felt my excitement grow with each step. I was not only entering a unique garden, I was for the first time going to meet the many children of Viru and Girija – their intriguing roses.

Viru’s interest in roses began at an early age. He was only 12-13 years old, but he still remembers the exact moment it happened. Viru was visiting Coonoor Hill Station, in the Nilgiri Mountains, together with his family. Viru’s father, who was the Director of Agriculture in the Madras State, was allowed to spend some days every summer in the guesthouse of Sim’s Park, the botanical garden in the heart of Coonoor.

“One morning, I happened to look out at the enclosed rose garden and was mesmerized at the sight of a golden rose glowing in the sunlight.” Viru had fallen in love with ‘Julien Potin’, a hybrid tea, bred by Joseph Pernet-Ducher in 1927.

Ever since the hybrid teas started to conquer India and the rest of the world, they have been much loved and appreciated for their large and well-formed flowers, which seldom leave the bush empty of roses during its long, repeat-flowering season. But the love for hybrid teas in India and other countries with hot climates is a complicated affair. It’s a love that comes with a price.

When, in last December, I visited the Indira Gandhi Rose Garden in Hyderabad, I was informed by the head gardener that he had to spray the roses once a week with several combination sprays of fungicides and insecticides, just to maintain the rose garden. To me, this was shocking news, thinking about the environmental impact. Or, as Viru reminds us, citing the Indian pioneering rose hybridizer Bhatcharji, who in the 1930s said: “rose growing is for the pleasure of raising flowers under normal care.”

“You should not have to use a whole army of chemicals”, says Viru, who, in his younger years, obtained a master in chemistry. “It’s not sustainable to treat roses as if they were patients in a hospital’s intensive care unit. The pesticide lobby has managed to manipulate people to take this wrong approach. But there are simple alternatives, such as baking soda. It’s useful to most of the problems that can befall a rose.”

Viru’s deep love for the rose compelled him, in companionship with Girija, to search for a solution to these problems. They found the answer in two wild roses that grow in India, R. clinophylla and R. gigantea, and after some adventurous rose-hunts, the couple was able to bring these roses’ disease-resistant genes into the breeding program, where they are crossed with healthy garden roses.

Most rose gardens have been created to please people. But Viru and Girija’s garden is also meant to please the roses while they take part in Viru’s successful hybridization. As we walk along the narrow paths, roses appear everywhere: seedlings in plastic bags are sitting in rows on the railed-in porch, potted roses fill up the borders and parade along the pathways – and the roses that have been put in the ground form huge bushes, cover pergolas, escape up into the tree tops or find a resting place on a roof top. It’s garden culture respecting nature.

We stop in front of ‘Rebecca’s Choice’, a lovely light pink rose where wilderness – R. gigantea – meets an old British tea rose, the pink ‘Mrs. B. R. Cant’, cultivated but disease resistant. The crossing, which can easily be viewed at a “table-top” pergola, did not at first catch Viru’s interest. But, as always, in the spirit of the teamwork of the Viraraghavans, Viru consulted Girija.

“Girija pointed at a single rose and said: ‘See how beautifully the petals are reflexed; it looks like a butterfly in flight!’, ” says Viru, and adds with a smile: “Her opinion is often somewhat different from my own, which I highly value.”

The flowers of ‘Rebecca’s Choice’ have that silky, see-through quality that Viru tries to achieve in his crossings. Sustainability has to come with beauty.

“It’s also important that the rose looks beautiful when it’s not in bloom, and this is where the foliage comes into the picture”, says Viru, who has started to bring Rosa laevigata, know for its beautiful foliage, into his breeding program.

‘Hillview’s’ magnificent giganteas are a stunning sight. These vigorous ramblers combine strength and elegance; their hooked trunks are as big as a man’s upper arm and the silky flowers together with their fine leaves, oblong and elegant, add to the giant’s delicate appearance. I fall in love with a pink crossing between Rosa gigantea and a miniature rose, which hadn’t been given a name. Very few gardens can host such “super-roses”, so most of Viru’s gigantea crossings will be sized down by further hybridization, until they have become more manageable bushes.

“Smell this!” says Girija as she bends a branch down showing me a single white rose with a beautiful yellow stamen. The flower belongs to Rosa clinophylla, the other rose species that is helping Viru to create sustainable roses. The flower smells like an open bottle of nail-polish remover. Crossed with other roses the odour becomes pleasant and distinctive, as in the case of the shrub ‘Pat Henry’. The importance of R. clinophylla lays in its ability to stand the worst rose-growing climates of heat and humidity and still look fresh and healthy, with green foliage year around.

A normal day for the Viraraghavans starts with a morning walk, followed by work. Viru waters the roses and, in the hybridizing season, makes the crosses, while Girija is responsible for the labeling and recording of the day’s crosses. Work in the garden doesn’t end until the sun has disappeared behind the rose clad cypress trees. The chilly evenings on the hill are spent near the fireplace reading books and studying rose- and other horticultural subjects, as well as writing their own articles about roses.

“It is surprising how much reading has to be done if one is to keep up to date in the rose world!” says Girija.

Girija is currently researching the locations of Rosa clinophylla in the south of India. She has found an old book pointing to a place not very far from Kodaikanal. Viru has, up until now, only worked with clinophylla clones from northern India, and the possibility to add more genetic material into the hybridization is exciting. Next February the couple will set out for this new rose-hunt!

Viru, on his part, has finally – after 35 years – received a plant of the rose he first fell in love with, the hybrid tea ‘Julien Potin’. The plan is to introduce its yellow color into the gigantea and clinophylla breeding lines. It’s obvious that the dedicated rosarians at ‘Hillview’ have no time to retire; their love for roses is the kind that doesn’t take a rest.

When I came back to Sweden I received a message on Facebook from Girija:

We have a request of you. You know the miniature rose x gigantea you liked and we have recently put a pic on FB ( you also took pics of it). It is in full bloom and looking really lovely. May we name it for you?

Suddenly the winter around me felt less cold. I imagined ‘Mia Grondahl’, my rose alter ego, showing her pretty flowers to Viru and Girija in their peaceful garden at ‘Hillview’; it somehow felt like I was still there. Or maybe it is Viru and Girija’s garden that has never left me. 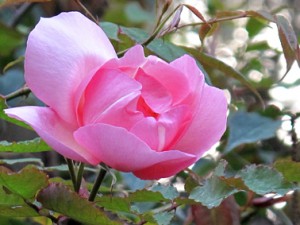 The article was first published in BAON, the newsletter of the World Federation of Rose Societies, 2015.